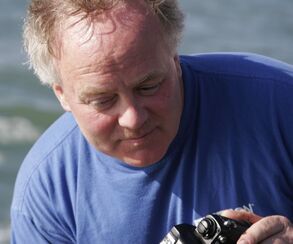 ​Kester, worked for over 30 years as a saturation “deep sea” commercial diver, offshore in the Oil Industry, primarily in the North Sea, but also abroad in Norway, Denmark and India. Alongside that he was involved in many underwater maritime archaeology projects, starting off with the excavation and raising of Henry VIII’s Mary Rose, which sunk in 1545 and was raised in 1982. Kester was a member of the salvage team that raised the vessel. After that he went on to other projects like the VOC ships Amsterdam, Vliegent Hart and Rooswijk and other projects in Sweden, Bermuda (Sea Venture), Israel and the Mariana Islands.
Kester has a passion for photography and video, both on the surface and underwater, and has brought these skills to many projects. Between 2003 and 2005 Kester returned to the Mary Rose and recorded footage of the diving archaeologists at work and everyday life during the excavations to recover the stem timber of the Mary Rose. Much of this footage has appeared on mainstream television documentaries. Here you can find a selection of video diaries produced from Kester's footage during the further excavation of the Mary Rose wreck site 2003 to 2005 plus footage from the Vliegent Hart and Rooswijk.
In addition, Kester has taken many underwater archaeological photographs that have been used in various publications. A selection of these can be viewed in his Portfolio, via the link below.
Kester Keighley Portfolio