Ships of the Royal Navy

Early History of the Royal Navy

Although warships were used by English and Scottish kings from the early medieval period, the first major maritime engagements were fought in the Hundred Years' War against the Kingdom of France. The modern Royal Navy traces its origins to the early 16th century; the oldest of the UK's armed services. 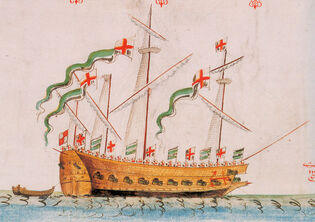 English ship Antelope (1546)
​During much of the medieval period, fleets or "king's ships" were often established or gathered for specific campaigns or actions, and these would disperse afterwards. These were generally merchant ships enlisted into service. Unlike some European states, England did not maintain a small permanent core of warships in peacetime. ​ standing "Navy Royal" with its own secretariat, dockyards and a permanent core of purpose-built warships, emerged during the reign of Henry VIII. Under Elizabeth I England became involved in a war with Spain, which saw privately owned vessels combining with the Queen's ships in highly profitable raids against Spanish commerce and colonies.
The Royal Navy was then used in 1588 to repulse the Spanish Armada. In 1603, the Union of the Crowns created a personal union between England and Scotland. While the two remained distinct sovereign states for a further century, the two navies increasingly fought as a single force. During the early 17th century, England's relative naval power deteriorated until Charles I undertook a major programme of shipbuilding. His methods of financing the fleet however contributed to the outbreak of the English Civil War, and the abolition of the monarchy.
The Commonwealth of England replaced many names and symbols in the new commonwealth navy, associated with royalty and the high church, and expanded it to become the most powerful in the world. The fleet was quickly tested in the First Anglo-Dutch War (1652–1654) and the Anglo-Spanish War (1654-1660), which saw the conquest of Jamaica and successful attacks on Spanish treasure fleets. The 1660 Restoration saw Charles II rename the Royal Navy again, and started use of the prefix HMS. The navy however remained a national institution and not a possession of the crown as it had been before. Following the Glorious Revolution of 1688, England joined the War of the Grand Alliance which marked the end of France's brief pre-eminence at sea and the beginning of an enduring British supremacy.
In 1707, the Kingdom of Great Britain was formed by the Act of Union, which had the effect of merging the Scottish navy into the Royal Navy, this was the beginning of what know is one of the world's most formidable naval war forces, the United Kingdom's Royal Navy.