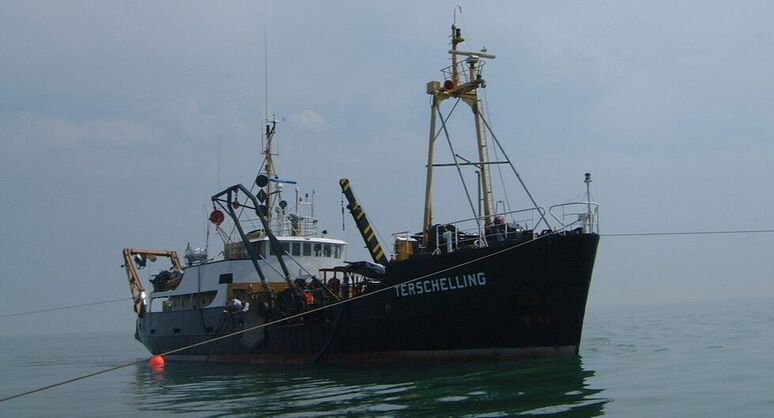 On 11 July 2002 the third consecutive season of the Anniversary Shipwreck  Project excavation began with the departure of the diving support vessel Terschelling from Plymouth. This year, the 400th anniversary of the formation of the Dutch East India Company, has been the longest on site, with six weeks of excavation   It is hoped that in this year in particular, the ongoing archaeological exploration of a vessel of the Company is one way of widening public awareness of the VOC, the trade with the East Indies, and provide information about life on board the vessels and what was required to support the settlements in Batavia.  More importantly, it is hoped that it will awaken the interest in the underwater cultural heritage through an appreciation of the objects and information which can be obtained from the excavation of these shipwrecks. The wreck lies at a depth of between 18-20 metres of water on a seabed of sand and shell, approximately 18 miles west of Vlissingen.  The site is relatively flat, with only a few features visible above the seabed.  These include remains of the sternpost and transom towards the port side. Excavation of this area  outboard suggests that the vessel is resting 33 degrees to port. Also visible above the seabed are several large structural elements which define the port side and a few recognizable objects such as iron guns. Any structure above the seabed is covered with fishing nets. Loose portions of structure have been pulled and torn out of position due to centuries of fishing.  Much is collapsed, broken, scattered and destroyed by marine boring organisms which eat wooden ships.  It is truly a dark and inhospitable place, with visibility often less than the distance of an outstretched arm. 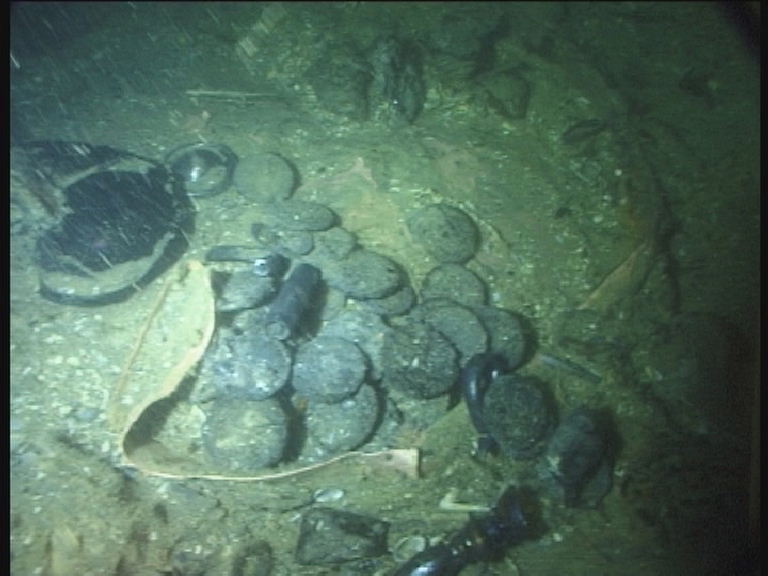 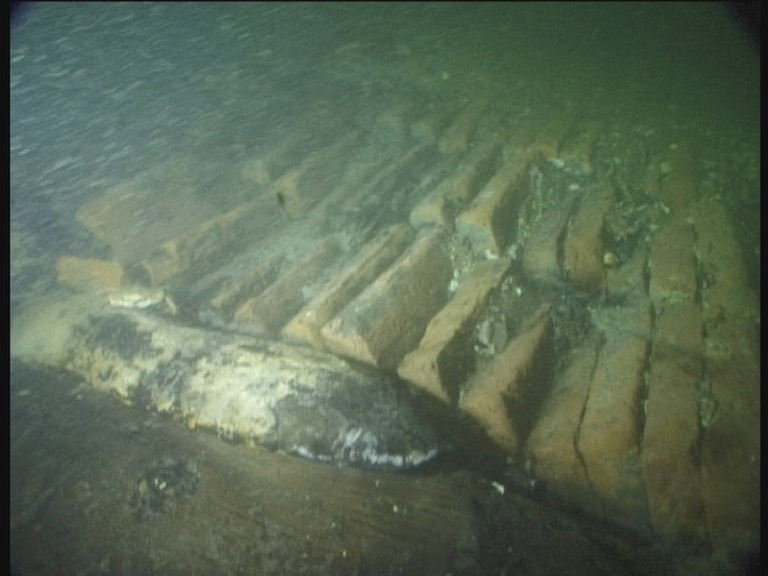 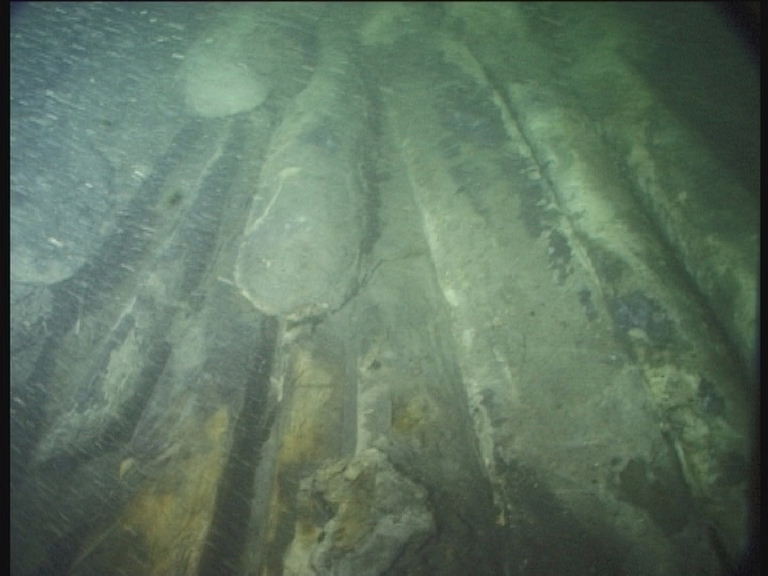 Lead ingot cargo
​The most durable objects are those made of metal, glass and ceramic.  Shattered bottles, the remains of the thousands of bottles of wine transported in chests, litter the site, just below a layer of sand and shell.  Broken pipes, all with marks suggesting the name of their maker, are mixed with broken bottles, bricks, china and stoneware.  Amongst these can be found corroded silver coins, damaged copper alloy buckles and pewter spoons, bent out of shape.  There are also a surprising number of animal bones – perhaps carried as food for the voyage.

Many of these are bound together in a hard concrete-like material formed by the corrosion of iron in seawater.  The iron is derived from many objects, iron shot for the 42 guns carried, iron bars carried as cargo to Batavia, anchors and other ships fittings.  Within this ‘concretion’ are the remains of less durable objects such as leather shoes and some of the thousands of bone combs.  Mixed in with these surface finds are lead net weights in their hundreds and portions of modern beam trawls and other modern debris.
A number of objectives were outlined for the 2002 field season:

​External trenches
​
The area of Trench 1 (outside the transom) was extended both northwest and northeast.  The northeastern area had been partially worked by earlier teams, but little is recorded of exploration to the northwest.  Immediately west of the sternpost concretion and nets had halted excavation in 2000.  In 2001 the transom frames had been followed towards the west and seemed to continue unbroken, although covered by patches of concretion, for a distance of some 14 metres, obviously merging seemlessly into the starboard side.  Excavation outside this area in 2002, and towards the south,  confirmed starboard side structure and revealed a large  copper alloy cauldron  (600mm diameter by 600mm high) wedged against the starboard side just over six metres south of the stern. It was resting against the outer planking, the outer sheathing having worn away at this point to reveal a coating occasionally covered with hair, and the telltail nail pattern used to attach sacrificial wooden cladding.   This was orientated top upwards, and had a gun carriage truck and several furniture elements inside it.
​Trial trenches outboard to the starboard side at the stern confirmed that there was very little of the starboard structure present in the stern.  The sternpost is torn, and transom knee on the port side ripped out of place.

Trial trenching in selected locations was undertaken to locate the starboard side confirmed that little remains of this structure as far as amidships. In all areas where hull structure was found, this consisted or inner planking, frames and outer planking.  Loose thin timbers suggestive of sacrificial outer cladding were found, but most  were not found in situ.   The bow was left undisturbed.

Excavation continued along the port side outboard to provide a continuous trench from forward of midships to link up with previous excavations of the stern port quarter undertaken by previous excavation teams.  This was a wide trench (in places up to six metres) over two metres deep until natural sand was found.  Concretions and loose guns were found within this trench, but surprisingly little debris from the collapse of the ship was found outside the wreck.
Within the portion visible in the trench, a complex scarf joint is present, secured with two 60mm iron bolts.  On each side of the keelson a 25mm layer of planking lay over the inner planking, extending 250mm each side of the keelson.  The bricks were stowed tightly against the keelson and any riders found.  The orientation suggests that the keel may be intact, and the position of the starboard side exposed in trial trenches confirms that the amount of structure present to the starboard side of the keelson varies between 2 and 4 metres, basically the floor timbers.  More structure is evident on the port side, comprising the floor and possibly including the first futtocks.  This  small channel between the floor and the port side provided a catchment area for objects, and barrels were found stowed along the length of the vessel within this shallow ‘v’.  Excavation inboard along this junction was achieved in tandem with the outboard excavation following the port side.

​Artefacts reached the finds area in one of two ways. By hand at the end of a dive, or collected en masse in a large cargo basket placed on the seabed near the excavation area.  The system for tracking these relied on each diver being allocated a sequential dive number and a unique crate number. In this way we ensured that finds were allocated within the virtual two meter grid encompassing the site.  In areas of concentrated excavation, without moving the half hourly crates, this provided information like the stratigraphic position of objects relative to each other and the seabed.
​Artefacts were processed on the aft deck in open air and initial registration was on drafting film. This consisted of a unique number, description, material identification and dimensions together with dive and crate number.  These were entered into the database daily.  Photography using a digital camera was immediate, and regular downloading was achieved. The aim was that objects excavated one day should be recorded and entered into the database with their photographs appended by the end of the next day.  This has been achieved. This was possible through the networking  together of a number of computer stations where data could be entered. A computer based finds handling system (Site Recorder) was developed specifically for this excavation. It is based on four main applications - a Microsoft Access database was used for recording information about artefacts and records for each dive, AutoDesk AutoCad was used for producing charts and survey management, Microsoft Word was used for text documents and Adobe Photoshop for managing images. All dive logs and previous records were digitized. The excavation resulted in over 2118 artefacts.  These include ship’s fittings, cargo destined for Batavia and  personal possessions for  use in Batavia.
2002 Artefact Photo Arcive

Many thanks are due to support from the following: