​The beginning of Maritime Archaeology 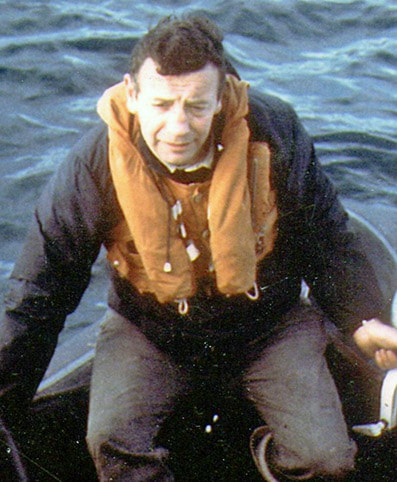 Sir Rex Cowan 1979
In 1968 Rex Cowan, a former court judge and lawyer negotiated a contract with the Dutch Ministry of Finance for the rights to salvage a VOC Ship, with a provision that the Dutch State received a quarter of the proceeds from the sale of the finds.
As his first project, Sir Rex Cowan went in search of the Hollandia, which sank in 1743 near the Isles of Scilly. After searching with divers, he found the wreck of the Hollandia. This was the first of eight contracts that Sir Rex Cowan would sign with the Dutch ministry, between 1969 and 2002.

Thanks to the success of the Hollandia, the curator of Dutch history at the Rijksmuseum, Bas Kist, understood that through collaboration with Sir Rex his museum would no longer need to buy artefacts from shipwreck auctions. In this way he also had direct access to the ordinary everyday artefacts from shipwrecks, that do not come to private auction houses, which can give us a view of life onboard the ship and an overview of maritime history of the VOC.

Collaboration with the Rijksmuseum

Sir Rex Cowan then signed a contract with the Rijksmuseum on 12 August 1981 to create a scientific framework in which t'Vliegent Hart could be excavated. These excavations were to be the start of real underwater archaeology in the Netherlands. The excavation of t'Vliegent Hart, involving Dutch volunteers, would become a training project for some of the first Dutch underwater archaeologists. From the early days of salvage in the 1960's to the present-day Sir Rex Cowan has worked closely with Dutch underwater archaeologists and museums, providing artefacts and information. This method of adopting an archaeological approach to shipwreck salvage, as underwater archaeology evolved, and developed into a fully funded government department providing an educational resource for today’s generation. Sir Rex was truly a visionary and pioneer of his generation.

t'Vliegent Hart, The beginning
​
In 1977 the manuscript chart, compiled by Anias of the wreck site, was discovered. In 1979 and 1980 different search campaigns were undertaken by the mixed British-Dutch team ”North Sea Archaeological Group” (NSAG) led by Rex Cowan. After nearly three years of searching for the wreck site of the t'Vliegent Hart it was found in 1981 using a magnetometer. This was newly developed technology and the t'Vliegent Hart was the first large ship found using a magnetometer. Identification of the wreck came after artefacts were recovered by divers, using dated coins, a side plate of a musket and a VOC cannon which identified the wreck as t'Vliegent Hart. The wreck was buried in the seabed with only part of the stern post showing, covered in fishing nets.

1982 and 1984 saw the first of a series of salvage operations carried out by divers of the NSAG. They recovered a number of artefacts including wine bottles, lead shot and a large number of lead ballast rolls. In July 1983 an intact money chest with 2000 gold ducatons and Spanish reals was recovered from the wreck site. In July-August 1985 a new series of diving operations were carried out by NV Sills Consortium Salvage Ltd., also led by Rex Cowan. The diving was under the archaeological supervision of Mark Hollingsworth. The diving operations were hindered by the weather conditions allowing only a small area of the wreck site to be excavated. Finds from 1985 included iron cannons and parts of the galley. In 1988 and 1989 excavation was again undertaken by the NSAG. Again the diving operations were restricted by the weather. In 1989 good weather allowed a large number of finds to be recovered, including artefacts from the officers' cabins.

Between 1991 and 1993 further diving expeditions and excavation was undertaken by the same group. Recovered artefacts in 1991 included a second chest, filled with gold ducats and Spanish reals, and other finds of small boxes filled with silver ducatons that were not recorded in the ship’s cargo manifest. This was thought to be evidence of illegal smuggling by the ship’s crew. From the discovery of the Anias document to 2002 Sir Rex Cowan’s expeditions to the t'Vliegent Hart have provided insight in to the history of the VOC, alongside the development of Maritime Archaeology in the Netherlands. Sir Rex Cowan’s involvement, from the 1960s through to  the Rooswijk project 2005-18, as a pioneer at the forefront of maritime archaeological research and  international cooperation, has provided an understanding of the history of the VOC through shipwreck sites.
TVH 1982 - 1983 report