People behind the camera 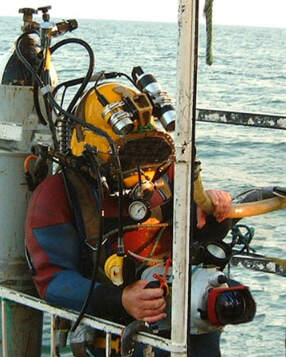 Kester, worked for over 30 years as a saturation “deep sea” commercial diver, offshore in the Oil Industry, primarily in the North Sea, but also abroad in Norway, Denmark and India. Alongside that he was involved in many underwater maritime archaeology projects, starting off with the excavation and raising of Henry VIII’s Mary Rose, which sunk in 1545 and was raised in 1982. Kester was a member of the salvage team that raised her.
Kester has a passion for photography and video, both on the surface and underwater, and has brought these skills to many projects. Between 2003 and 2005 Kester returned to the Mary Rose and recorded footage of the diving archaeologists' at work and everyday life during the excavations to recover the stem timber of the Mary Rose. Much of this footage has appeared on main stream television documentaries. Here you can find a selection of video diaries produced from Kester's footage during the further excavation of the Mary Rose wreck site 2003 to 2005.

Cameraman Steve Foote
Steve started working in the TV business as an assistant cameraman in 1983. Moving up to cameraman in 1986 shooting on his own Arri 16SR. Steve is a specialist in underwater photography and diving and his work featured heavily on the History Channel. Steve studied photography at Plymouth College of Art. Whilst there he became heavily involved as a member of the diving team excavating the wreck of King Henry VIII’s flagship, the Mary Rose, where he subsequently became the staff photographer.
In 1983 he started his career in the Film and Television industry as an assistant cameraman, becoming a cameraman in 1986 – specialising in underwater filming. Since then, his work has taken him to more than 50 countries around the world – war zones, deserts, rain forests, deep ocean, deep freeze. He has worked in most areas of the film industry – commercials, drama, corporates, feature films, but mainly working as a documentary cameraman. He has worked on many films which have been nominated or won awards at BAFTA, RTS, Emmy and IVCA.  Although working as a Director of Photography is considered his core business, he still actively takes still images. He has had numerous pictures published, and in 2009 he embarked on new work for the Mary Rose Trust, photographing artefacts for the new Mary Rose Museum in Portsmouth – some of these images can be seen in the Mary Rose gallery. Between 2003 and 2005 Steve brought his vast knowledge of underwater filming back to the Mary Rose project excavations. Working alongside other commercial divers he captured some of the best and unique images of the Mary Rose's bow section, anchor and stem piece creating two documentary videos for the Mary Rose Trust that can viewed below.