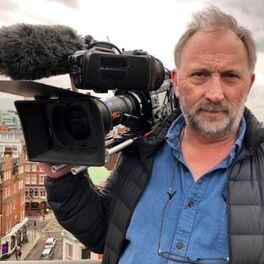 Cameraman Steve Foote
Steve started diving with the Oxford Branch BSAC in the mid-70’s.  In 1979 he became involved with the Mary Rose Project as a member of the archaeological diving Team. At the same time he was a photography student, specialising in underwater photography at Plymouth College of Art.  He continued diving on the Mary Rose during his two years at college. In 1981 he started working full time on the Mary Rose.  He was appointed staff photographer in 1982, and also became one of the chief divers to a small team that completed the archaeology on the ship prior to the lift later that year.
After the Mary Rose, Steve started using his skills as a cameraman working in TV.  His work has taken him to more than 80 countries around the world – war zones, deserts, rain forests, deep ocean, deep freeze. He has worked in most areas of the film industry – commercials, drama, corporates, feature films, but mainly working as a documentary cameraman. He has worked on many films which have been nominated or won awards at BAFTA and RTS.  Although working as a Director of Photography is considered his core business, he still actively takes still images. He has had numerous pictures published, and in 2009 he embarked on new work for the Mary Rose Trust, photographing artefacts for the new Mary Rose Museum in Portsmouth – some of these images can be seen in the Mary Rose gallery. Between 2003 and 2005 Steve brought his vast knowledge of underwater filming back to the Mary Rose projects excavations. Working alongside other commercial divers he captured some of the best and unique images of the Mary Rose's bow section, anchor and stem piece creating two documentary videos for the Mary Rose Trust that can viewed below. ​https://www.stephenfoote.co.uk