The Invincible was originally a 74-gun ship of the line of the French Navy launched in October 1744. The ship was captured on 14 October 1747, the vessel was taken into Royal Navy service as the third-rate ship the HMS Invincible. The ship was wrecked in 1758 after hitting Horsetail Sandbank in the Solent. During the early part of the 18th century British ship designers had made few significant advances in design, whereas French shipbuilding benefited from a remarkably creative period. At the time of the capture of Invincible, there was not one 74-gun ship in the Royal Navy. By 1805 at the Battle of Trafalgar, three quarters of British ships of the line were of this singular design and this 74-gun ship had become the backbone of all major navies of the world. 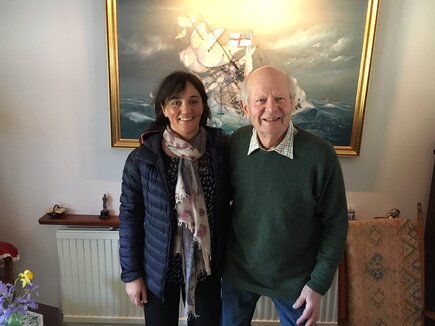 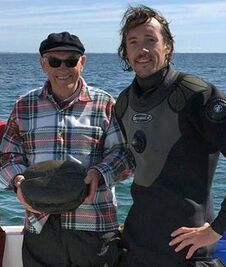 Auther Mack & Dan Pascoe
​The site of the wreck was rediscovered by a fishermen Arthur Mack in 1979, on the Horsetail Sandbank in the Solent and was designated under the Protection of Wrecks Act on 30 September 1980. John Bingeman managed the site from 1980, carrying out a series of excavations and constantly monitoring the site, while removing any at-risk artefacts that had been exposed. In 2010 Dan Pascoe of Pascoe Archaeology took over management of the site carrying on the work John Bingeman had started in 1980. It was evident by 2013, due to the natural erosion of the site, that this historically important shipwreck was suffering from microbiological degradation and mechanical attrition. The wreck was then placed on Historic England's (then called English Heritage) list of ten most at risk heritage sites. In 2016 Pascoe Archaeology Services conducted a detailed archaeological survey of areas of the Invincible wreck site reporting that elements of the wreck were at further risk. 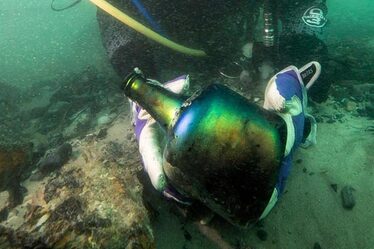 Dan Pascoe, the site’s licensee, led the excavation starting in 2017, where teams of archaeological divers worked over three seasons excavating and recovering artefacts from the site of the HMS Invincible. Their work included - Excavating the site, recording and assessing the finds before they went to MAST's maritime archaeological conservation centre in Poole. The dive team spent a total of 1998 hours under water making this one of the most productive archaeological excavations to date, in terms of dive hours in the water. The research of the artefacts and history gathered from the excavations have allowed for a digital educational resource accessible to the public along with a major exhibition at The National Museum of the Royal Navy, Portsmouth Historic Dockyard.  ​ 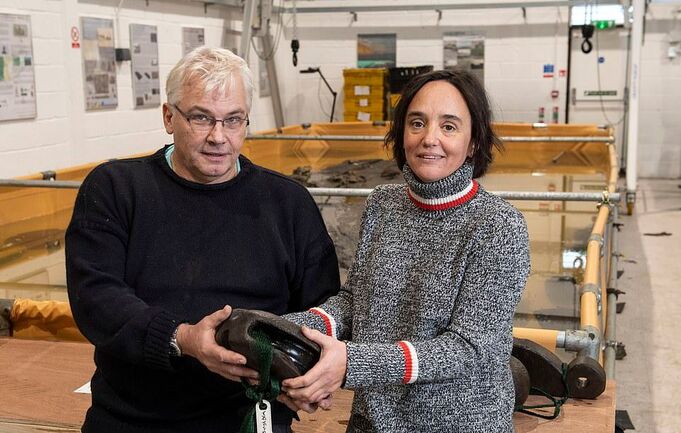 Professor David Parham from Bournemouth University (left) and Jessica Berry from MAST (right)
Jessica Berry, Chief Executive of the Maritime Archaeology Sea Trust (MAST) and Professor Dave Parham, Professor in Archaeology, Anthropology and Forensic Science at Bournemouth University took a significant role in the overall project and excavations during the 2017 to 2019 expeditions on the Invincible site. They both deserve full credit for respecting and continuing the work that had been previously carried out on the site by John Bingeman and Dan Pascoe while being totally inclusive and mindful of all who had worked on the site since its discovery in 1979. The inclusion of volunteer divers of all ages and abilities from maritime archaeologists, archaeology students, amateur and commercial divers, gave many people the once in a life time opportunity to learn and experience hands on archaeology.
The educational value of this project has been fully achieved in providing a new public display at the Royal Naval Museum in Portsmouth Historic Dockyard. The archaeological work both in recording and conserving the HMS Invincible artefacts has set a new bench mark in archaeology. Furthermore, the use of modern photogrammetry technology and Virtual Reality tours available to the public has provided one of the best sources of valuable historical, archaeological and educational platforms. This has achieved one of the highest standards in recording and communicating the history archaeology along with a virtual archeological site accessible for the public to explore. The HMS Invincible project must now be seen as a bench mark in the world of maritime archaeology.